Keep Up With The Lonetones 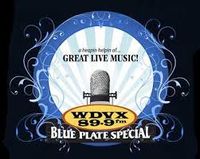 The WDVX Big Plate (AKA the Friday Blue Plate Special). This is a live radio show that is broadcast on WDVX at 102.9 and 89.9. You can come be in the audience at Barley's. You can also listen on wdvx.com or watch the Facebook live-stream on the WDVX Facebook page. It's a free lunchtime show. Pizza and beer available. 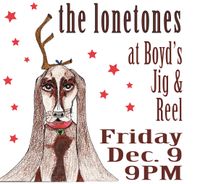 A free show at a Scottish pub that boasts one of the largest selections of Scotch in the world. They also have a killer mac 'n cheese pie along with other Scottish fair. 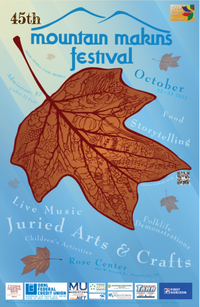 This festival hosts arts and crafts, folk-life demonstrations, children's activities and live music. We'll play two sets. One at 11:45 and the other at 1:15.

“The Lonetones have perfected contemporary Appalachian music” according to Blank Newspaper. But that might not mean exactly what you think. Wayne Bledsoe of the Knoxville News Sentinel notes that “it's a group that isn't hemmed in by any boundaries… the Lonetones have developed into a genre-bending group that doesn't quite fit into any niche and instead feels right almost everywhere.”

They have been called Americana, Folk Rock, Indie Folk, Folk Pop, Modern Folk, Folkadelic.... Driven by the songwriting of Steph Gunnoe and Sean McCollough, the band artfully fuses urban and rural themes and musical styles. The lyrics are fueled by a search for identity in the changing Appalachian landscape. Sometimes you’ll catch them playing banjo and mandolin. Other times, electric guitar and keyboards

In their early years, they were often compared to revivalists such as Iris Dement or Gillian Welch & David Rawlings. But in more recent years, they have also drawn comparisons to other bands that draw on roots music but expand well beyond it such as Wilco and the Byrds. As they have grown as artists, their sound has become a unique mix of folk, rock, pop, and old-time elements.

In ranking their fourth album, Modern Victims (which placed on the roots music charts for several weeks) in his top ten albums of the year, Wayne Bledsoe of the Knoxville News Sentinel had this to say:

Think of the Lonetones as spiritual kin to Wilco or the Byrds. Led by husband and wife team and lead singer-songwriters Sean McCollough and Steph Gunnoe, The Lonetones are folky, a little rock and are constantly finding new and gorgeous sounds and expanding their horizons. The leaders’ songs and vocals are contrasts that blend into something amazing.

Both the band’s lyrics and music speak to the conflicted nature of a region steeped in tradition while blighted by Walmarts and stripmines. They speak to generational conflicts and the inner struggles of those whose hearts and souls are tied to the mountains but also want to be set free.

Bradley Hanson of Knoxville Voice writes that “their music rings from the mountains of Appalachia with a reverent, enduring and, at times, conflicted spirit. The band mates shoulder their geography with craft and care.”

More Comments from Others

Here I was, a local music writer and I had never heard the Lonetones live. What an idiot. I’ll know better next time, as my mouth dropped a mere 45-seconds in. I stopped what I was doing to soak in what was one of the best sets of the weekend.

I expected to like this CD [Modern Victims], but not necessarily to go crazy over it, but that's what I've done. One minute I love Steph's songs and the next I'm thinking I lean more toward Sean's. Of course, the whole is greater than the parts in this case. I can't stop listening.

The tradition they tap becomes only part of the overall equation; these engaging encounters could be considered radio-ready regardless of the environs.  To say this is an outstanding effort doesn’t even begin to describe it.

The Lonetones are fantastic on stage with the kind of sound that takes your soul on a joy ride! Their professionalism is outstanding. Bottom line... these are fine musicians and their new CD, Modern Victims, is one of the best releases of 2012.

If a band of 24 year olds with just the right hats and beards came out with this release [Modern Victims], we might be looking for it on the pop charts, catching a ride on the neo-Americana wave that’s been recombining itself every few weeks.

More About the Band’s History

Steph Gunnoe and Sean McCollough met in Knoxville, TN in 2000. They immediately discovered a shared love of Appalachian roots music. Soon they began picking out tunes together, and their complimentary musical styles quickly became apparent.

They spent many afternoons in Steph's kitchen arranging songs by traditionalists such as Hazel Dickens, Bill Monroe, and Gillian Welch along with several of Steph's early originals. Their first public performance together was at the beautiful Palace Theater in Maryville, TN for a friend's wedding. Their second public appearance was live on the radio on WDVX, and their musical career as a duo was on it's way.

A couple of years later, they met Maria Williams through friend Phil Pollard (who Sean Played with in a band called Evergreen Street). Maria soon joined them on upright bass and they started calling themselves The Lonetones. In 2003, they put out their first album, Useful. Phil played drums on the album and soon began joining the band for live gigs as well.

The band began playing regularly around Knoxville, and then also began traveling to nearby cities for gigs. They released their second album, Nature Hatin' Blues, in 2006, expanding their sound with the addition of vibraphone and glockenspiel (played by Pollard). In 2008, Pollard moved to Richmond, VA and was replaced by Steve Corrigan. As they prepared to record their next album they expanded their sound even farther by adding Lissa McLeod on accordion and keys. They released Canaries in 2009.

The band briefly stripped back down to four members with Sean adding keyboards to his arsenal of instruments. But despite having fewer members, the band's sound actually expanded with Steph switching to playing electric guitar on some tunes and Maria switching to electric bass.

As they began recording their fourth album, Modern Victims, they employed the services of Cecilia Miller on cello. She quickly became a regular guest at live shows and is now a full-time member of the band.

After Modern Victims, the band line-up changed again. With Steph and Sean at the center and Cecilia playing cello, Jamie Cooke (Black Lillies, Everybody Fields...) joined them on drums. Then, after over a decade of playing with Maria, she moved on and Vince Ilagan (Circus #9, Scott Miller, Justin Townes Earl, Christabel and the Jons…) steppedin on bass.

In 2017 they released their fifth album, Dumbing It All Down. They are currently working on a sixth album.

The excellent song writing, vocals and instrumentation that have marked previous Lonetones releases are brought, on Dumbing It All Down, to another level. It’s tighter while being more expansive, focuses on the loss of nuance while delivering it in every direction and sends the group’s musical message to new heights. Here’s hoping it reaches the fans it deserves.

- Alan Sims (Inside of Knoxville Blog)